I started this homepage on 8th November 2003 without any knowledge of WebPages or HTML. After fiddling with free or purchased programs I finally used Word. Drawings and schematics are drawn with ABACOM's sPlan, but a lot of symbols are scaled down to smaller figures. The emphasis of all articles is technical information about my experiments, projects, modifications and previously published items in magazines designed for amateur radio. Texts, schematics, photos and articles are updated or added when there are new developments or insights. It is also possible for me to amend an article in response to a comment or request from a visitor. DISCLAIMER: Unfortunately I have to avoid any liability, it should be clear that everything you build you do entirely at your own risk. I am not a professional in the electronics world, it is just a hobby but up to now many hams have built my designs successfully.

Articles, drawings, schematics and photographs may be published elsewhere if you mention the source. A message to me eventually with a copy of the publication would be appreciated.

I learned a lot from articles that were published by radio amateurs in Electron, RadCom and other electronics magazines. In return I try to do the same for others.

Today, according to many radio amateurs, the articles in ham magazines are too theoretical and therefore I would like to focus on the practice. Novices or inexperienced radio amateurs are possibly encouraged to experiment or even build their own gear. Don't be shy, start simple, learn and remember that many people talk about home brewing, but never start to build. Most knowledge is gained by doing it yourself. During the construction and experimentation you get some insight and understanding, especially if it does not succeed right away or something goes wrong.

If finally you repair the purchased device or the home construction works, is modified, converted or adjusted, then the satisfaction will be your reward. That feeling is indescribable because you have experienced it. You have nothing more to fear and a desire for the next technical challenge is a fact. 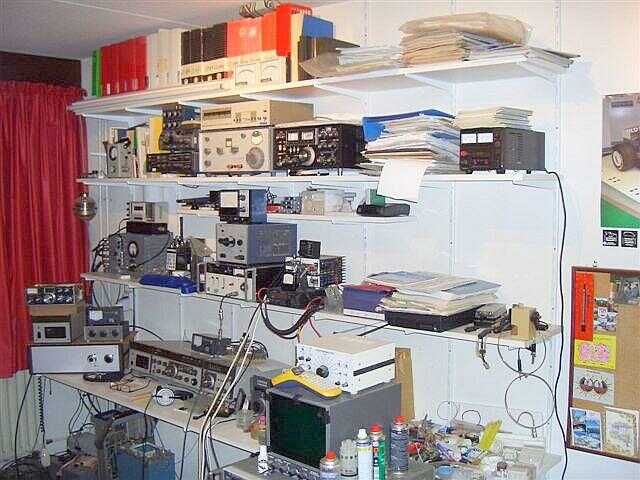 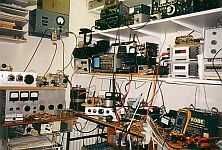 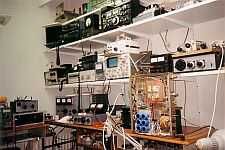 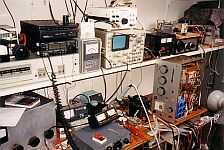 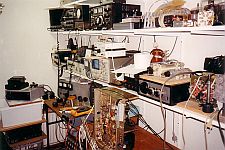 My shack was in the attic for years. 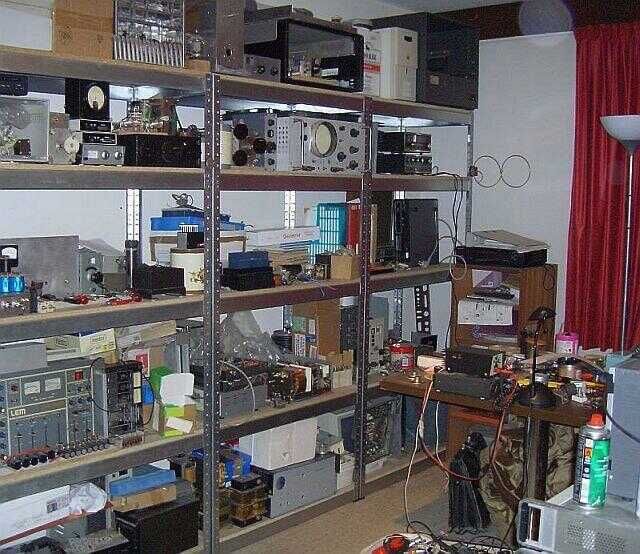 My main activities are experimenting, creating, modifying, testing, "designing" and occasionally publishing. There are practical issues I published in ELECTRON, CQ-PA, Radio Communication, CQ Friese Wouden, QRP NEWSLETTER magazines and reprints in other magazines. I did a lot of DIY, but if everything works my enthusiasm decreases. Often the device is again partially or fully dismantled for parts to be available for another idea or project. If the intention is to use the device, it is built neatly but the finishing of the front is often delayed. Many circuits and brainstorming that are shown are my own designs. Practical experience is gained with antennas, antenna tuners, baluns, RF amplifiers, receiver inputs, mixers, AF & HF speech processors and 2m transistor final stages. 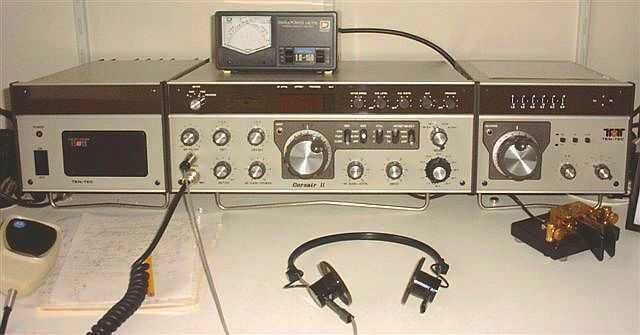 Mainly I transmit on the HF & WARC bands with a modified Tec Corsair II, a modified Atlas-210x, R5 vertical and inverted 2 × 17 m dipole fed with ladder line and matched with my own design: an S-Match symmetrical antenna tuner. There are currently homemade linear amplifiers FRI-400 (4 × PL519 400W), FRI-750 (TB3/750, 750W). Further a couple of modified PA's: Tec Centaur (3 × 572B, 800W), Heathkit SB-200 and Kenwood TL-922A. In development an FRI-1500 (1500W) with Russian tetrode GU-43B in a passive grid circuit and also in progress a Dentron GLA1000 with 2 × Gi-7B's in parallel. The RF amplifiers are rarely used effectively on HF bands. Building is fun and they are mostly used for testing antennas, ATU's, dummy-loads, low-pass filters, coaxial cables and ladder lines.

Meanwhile, many SWL's and hams have been helped directly or via email with troubleshooting or repair of transceivers, RF amplifiers, antennas and antenna tuners. On average 3 times per week, someone from the Netherlands or abroad asks a question by email. The answer can sometimes take a while because my time is largely taken up by my own household, maintenance of house and garden and taking care of my 80% disabled wife.

I took the first steps

on the path of simple electronics and started to build a crystal receiver. Didn't we all? Soon after a ham that lived close by donated a couple of old "tubes" and other components. Under his supervision straight receivers were built. The next step was the construction of a superheterodyne receiver with 1.4V tubes. At that time in your late teens it was a sensation when you walked with a portable MW receiver (size of a small cooler) on the beach of Scheveningen etc. The 90 V anode battery was too quickly discharged and a new one was a considerable drain on the pocket money. The first real contact with the amateur radio took place in 1961 when I was CW operator of PI1KMA, a training station for cadet officers of the Royal Military Academy (KMA). One of the supervisory radio amateurs was the late Henk, PAØDB. CW instructions were on a voluntary basis. Henk and instructor warrant officer van Lieshout helped me to deal with the noble art of Morse. They had to have a lot of patience as the cadet and the current method of instruction (drill) did not fit together! Fortunately, the drill was released and extra training took place in the free time. So Morse was relatively quickly learned. 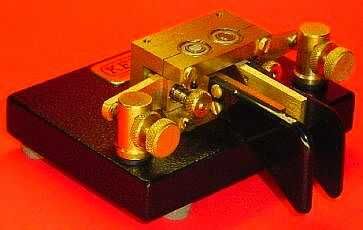 A few years later I passed

the test for my license successfully. Three years later in March 1969 the call

was requested telephonically and was assigned in minutes. It was still possible then! I commenced with

and the first rig was home made: a 30 W CW transmitter with an EL-500 sweep tube and a Semcoset Semiconda receiver (kit). The antenna, a 5 m army whip, was mounted at 60° on a long metal balcony. The flat was on the sixth and highest floor, so my signal was so strong that I was the first in many pile-ups.

I was eight years VERON & VRZA QSL manager in Etten-Leur and two years president of the VERON Breda. 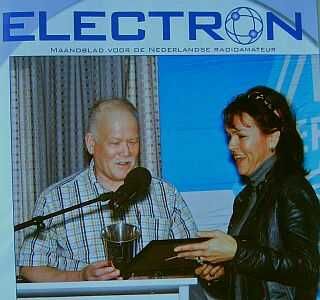 In co-operation with 2dehands.nl I launched the advertising page www.zendamateur.2dehands.nl as a service for hams and SWL's. It is a more or less an independent "daughter" of 2dehands.nl. You may have noticed that I use different rules than the general conditions of 2dehands.nl. The strict enforcement of the rules is supported by a majority of radio amateurs and has contributed to the success with an average of 4000 adds. I receive no fee for managing and monitoring. Unfortunately I am regularly harassed with rude emails from non-hams and even from legal "radio amateurs" who do not accept my policy. 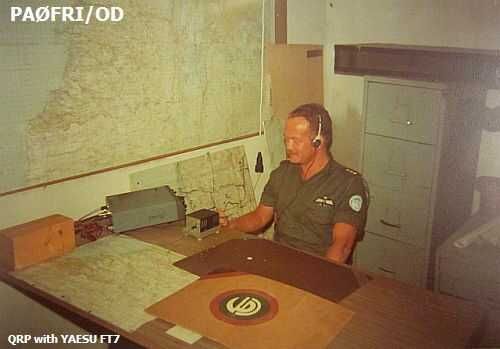 I was PAØFRI/OD during an UNIFIL mission (1982/1983) in Lebanon. In March 1993 I got an official 9A/PAØFRI license in Croatia as a military observer (UNMO) of UNPROFOR. I worked with that call near Dubrovnic on the peninsula Prevlaka very close to the border of Montenegro. I was probably one of the first with an official written Croatian license, because local amateurs still had documents with a YU prefix. A month later I was transferred to Sarajevo. There was no opportunity for amateur radio. A month later I was posted to Gorazde. In this Muslim enclave I was a couple of times guest operator in the local club station. A unique experience, simply because in the Netherlands it would not be allowed to operate an amateur station in wartime.

The team of observers to which I belonged was the first that was posted permanently in Gorazde. It was reached after difficult negotiations with the parties concerned. The previous teams stayed just one week. Daily travel to and from the enclave (for supplies in Sarajevo, negotiation, discussion or observation outside Gorazde) was only possible via a passage in a parapet of earth. But first mines had to be cleared and then a bulldozer pushed the earth aside. Then everything was returned to its original state. Our team delivered the fuel for the bulldozer.

In the beginning our task was: observing, patrolling, reporting, negotiation, services, visits, exchange of mail and delivery of The Rules for the Treatment of Prisoners of War, inspection of facilities for refugees, arranging shipments of food, food drops and transport of seriously injured people. Many of these tasks should have been carried out by other international organisations, but we were at that time still the only impartial and neutral team (with limited transport facilities). Some time after my rotation an English battalion was deployed there.